SIR SAFETY CONAD PERUGIA IS IN THE HISTORY OF VOLLEY

There is a new team in the elite of male volleyball. It is the Sir Safety Conad Perugia.
The Umbrian club, at the sixth season in the top Italian series, has realized investments, ambitions and dreams dominating Italy and dyeing even the black and white of Europe.

Relive the amazing season of this Mikasa Team Uniform.

OCTOBER, 8th 2017: THE ITALIAN SUPERCUP
The final of the Italian Super Cup 2017 was the sixth in the history of the Club. In the previous five, the Block Devils were sometimes close to the target without ever centering it. This possible frustration of five second places has been completely canceled by the spike of the American spiker Aaron Russell who has bent the resistance of the hosts of Lube Cucine Civitanova Marche.

Four sets that have not only been the first trophy of Club history in the Italian Superlega, but were above all a message for all the opponents: in the 2017/18 season the Sir Safety Conad Perugia is there

REGULAR SEASON SUPERLEGA
This first great success has given confidence to the men trained by Lorenzo Bernardi who have dominated the Italian Regular Season since the first round, closed at the top both at the end of the first and second half winning the pass for the next edition of the Champions League.

The Sir Safety race continued in 2018. In January, the red round weekend was January 27-28. Superlega stopped to give space to the Final Four of the Italian Cup in Bari. The Block Devils have conquered again the final and they still play it with Civitanova Marche. The Sir Safety Conad Perugia was affected by the pressure of this match in the first set but then in addition to the muscles showed the mental strength of those who are about to make another exploit. In the fourth set Aleksandar Atanasijevic's spikekicked off the credits. Capitan De Cecco has raised the second seasonal trophy, the Italian Cup is of the Sir Safety Conad Perugia for the first time. 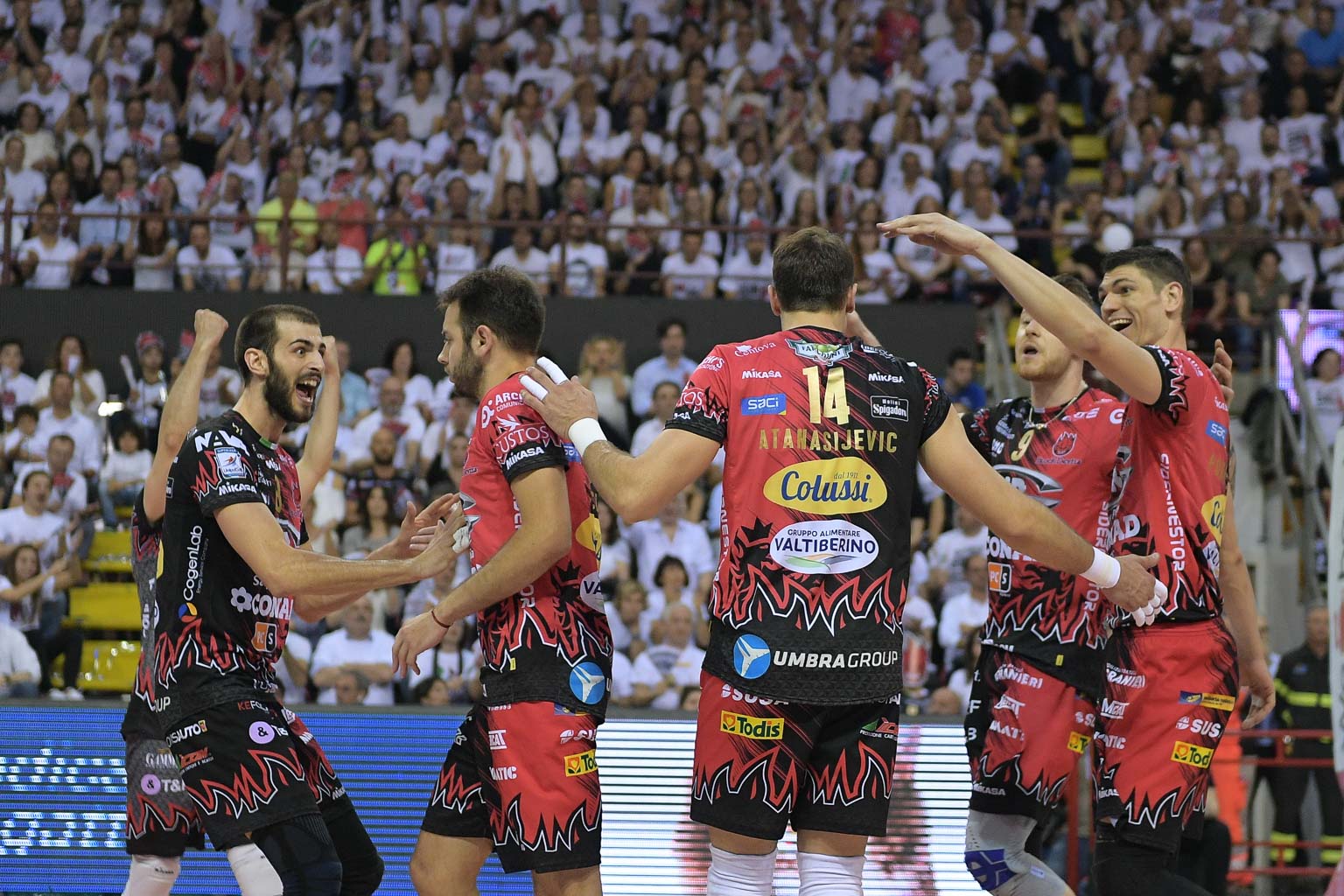 After the finals of the Italian Super Cup and Italian Cup, the Sir Safety Conad Perugia has won the right to participate in the third final championship of its history. On the other side of the net, Civitanova who is ready to defend the national title won in the last season. The two teams have dueled for four exciting matches, capitalizing the home factor and playing everything in match 5. In its Sport Hall, sold out in every order, the Sir Safety Conad Perugia did not miss the best opportunity to cheer once again their own people beating 3-0 opponents in a match that was a skirmish of nerves and high-level gaming actions. In the last set, the hurricane Sir lashed out against the defense of the opponents until the last attack by Ivan Zaytsev. For the Mikasa Team Uniform is the second championship won in season. Seven days before Imoco Volley Conegliano conquered the second Italian Female title.

FINAL FOUR CHAMPIONS LEAGUE
For Sir Safety Conad Perugia there was no time to celebrate a historic triplete. After dominating the Italian scene, Perugia is called to a last and splendid effort: the Cev Champions League Final Four. In the semifinals De Cecco and his teammates failed to oppose Dinamo Kazan but in the bronze match the Block Devils immediately redeemed themselves and went on to take a third place that ended a winning and unforgettable season.